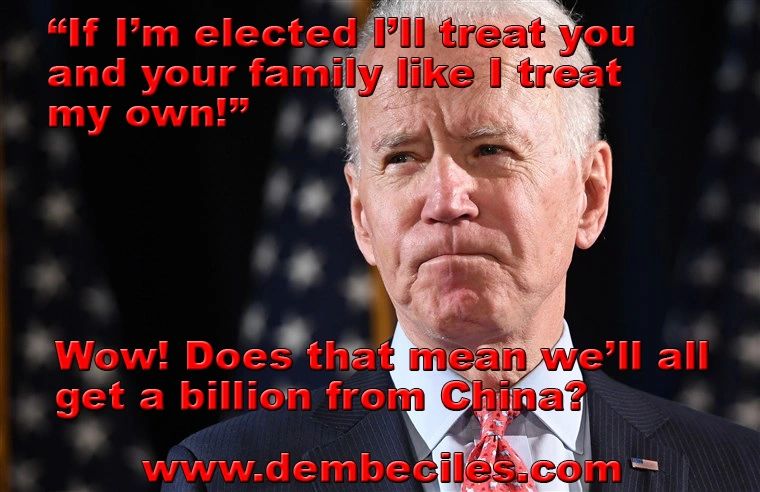 Is this what you want for America?

Leslie Stahl, during the Trump interview, looked the president right in the eye and said, without blinking, “There’s no proof of your campaign being spied on.” Only a practiced liar could do that. I have no idea how he restrained himself from saying, “Can you read?” or “Did you watch the multi-million dollar debacle Muller Investigation?” Or more pointedly, “Are you a total imbecile?” He soon walked off the set leaving Stahl dumbfounded. It’s my belief she and CBS stepped in it and Trump outsmarted them. He used her and her network and the nation’s No. 1 network news show as the prime example of “the lying press.”

I couldn’t help but wonder about NBC choosing Savannah Guthrie to drill Trump during last night’s so called Town Hall. I can only assume they hoped to make him look like a bully. He did not let her push him around, but did not go for the throat like he might have had a man asked the same stupid questions. For instance “Do you actually owe four hundred and fifty million dollars.” He gave the perfect answer and my wife and I laughed when he said almost exactly what I’d just said, “Most people owe a mortgage on their own house.” The fact is in America today most owe a seventy, eighty, or even ninety percent mortgage. If Trump’s real estate is worth five billion and he owes four hundred fifty million that’s a nine percent mortgage. Again, the prestitutes think you’re so stupid you can’t figure it out. She inferred Trump wouldn’t answer “Do you condemn white supremacist groups, you’ve never done so?” I’ve never heard him not do so. Guthrie was taken aback time and time again when Trump said, “We actually agree.” Biden on the other hand was not asked the most contentious question of the day, “Did your son take millions from foreign interests?” Or about the email his son reportedly sent, “Yeah, but you don’t have to split with the big guy.” And a Town Hall, Guthrie asked forty-three questions and allowed the public ten. It should have been advertised a Guthrie Hall meeting.

I also had a chuckle seeing the come-f…-me shoes Savannah wore, or maybe she thought they were. To me they looked like rejects from the Goodwill store. High, high heels but with clunky heels so she didn’t fall on her face physically like she did figuratively and metaphorically.

The most insulting question Guthrie asked, trying to lead Trump into a trap of accusing a Gold Star mother, “Was it your meeting with the Gold Star parents where you got Covid?” And the stupid questions about Q-Enon were equally insulting. Trump was at his very best and rather than verbally punching her out, laughed her off. And she was laughable, as was George Stupidnopolis at the Biden so called Town Hall. I’m surprised Georgy-boy didn’t close the space and lay Biden’s head on his shoulder as he didn’t want to hurt Biden’s feelings asking what could have been penetrating questions. As a member of the Society of Professional Journalists, I can’t begin to tell you how embarrassed I am for the industry, the brotherhood, of what was once a far more honorable profession.

Trump says he's a nationalist and the dembeciles say he's a racist because he does. I guess they didn't notice this nation is made up of ALL nationalities? I may have to change dembeciles to dumbeciles?

Trump? Are you crazy?

Every day I'm entertained and brought to guffaws by the incredibly inane and insane statements of liberals.  Particularly presstitues.  If you have any common sense, and want to get a good laugh, tune in MSNBC, CNN, CBS, NBC, or ABC.  It's better to laugh than grit your teeth until they crack. :-)  So, I comment on that and occasionally more serious subject matter.

The press in America is totally out of control, so biased, so without pride in their own profession that it precludes all a free press might accomplish in that all important aspect of our society...transparancy. I'm truly embarrassed for them.

Our educational system needs to go back to the basics, particularly when it comes to history. It's said if you don't know it you're bound to repeat it.

This pretty much says it all....

I'm a lifelong conservative who believes in self-reliance.  Born in county housing, worked my way--thanks to the opportunity offered by this great country--into middle income and proud of it.  God Bless America, and let's fight to keep her free and the go-to country in the world.  And do so by honoring the Constitution.

Love writing and going into the high country with my rifle in hunting season and my cameras year round.  Over 4 dozen novels and non-fiction works, several screenplays, and dozens of articles later, it's a good thing I still enjoy the process.  Check out my webpage ljmartin.com for more.

As an author, and one who had a fairly extensive art background (majored in Architecture) I began messing with cover design 30 years ago, and 5 years ago started doing artwork for others...and have done over 400 book covers and who knows how many ads, and webpage segments.  See coversbyljmartin.com

The Democrats inaction on the wall is bordering on treason!